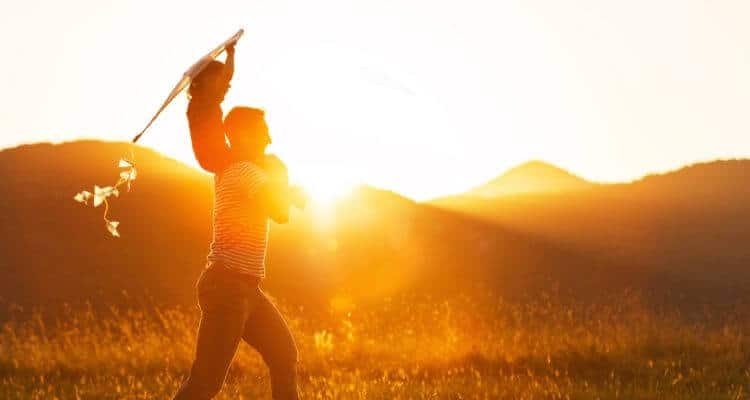 Some dads or soon to be dads will start asking “what does it mean to be a father.”

Instead of asking what being a father means I’m going to challenge you to look at fatherhood.

Ask yourself “what does fatherhood mean to you.”

While it doesn’t seem like such a big deal, figuring out what fatherhood means will be pivotal in this journey you’re on.

For those still expecting, the journey you’re about to begin.

*Disclosure: This post may contain affiliate links. If you click and make a purchase, I may receive a commission. For more info, please see my disclaimer.

Cambridge Dictionary defines father as: “a male parent,” but defines fatherhood as “a lifelong responsibility.” Let that sink in as you read on.

The Beginning of My Story

Fatherhood and this idea of being a dad is such a weird concept.

I recently had my son, and honestly, I’m still learning. Personally, I never thought much about fatherhood.

It had always seemed like something far in the distant.

It seems like just yesterday I was graduating high school. Young, selfish, immature and ignorant of the realities of the world.

Now I’m older. I like to think of myself as more mature and wiser about the world.

The selfishness of youth dispersed when I laid eyes on my son. Still the thoughts of what fatherhood means still lingers on.

America has a fatherhood problem.

There is a lack of fathers to teach boys what it means to be a man and to partner with someone in raising a family.

After the Industrial Revolution families in farming communities left for the urban cities.

Long hours and weeks meant fathers were no longer as involved in the day to day lives of their children.

Over time this notion of husbands and dads being the breadwinner lead to more absentee from the father.

Fast forward to today. Between divorce rates and boys impersonating as men, it has become even more prevalent.

Are Father’s Really that Important?

You might be wondering that question. Does it really make a difference in a child to have that consistent male role model in their life?

We’ll give our direct answer below, but before we do, we’ll let some of these statistics on fatherhood answer your question.

In the United States:

➜ 43% of children are without a father (US Census Bureau)

➜ 85% of minors in prison grew up without a father (Texas Department of Corrections, 1992)

➜ Children with involved fathers are more likely to do better in school (U.S. Dept of Health and Human Services).

➜ Children have fewer behavior problems in school when a father figure is involved in their life (U.S Dept of Health and Human Services).

➜ Girls do better in mathematics when growing up with a father figure (U.S Dept of Health and Human Services).

➜ Boys get better grades when a father figure is in their lives (U.S Dept of Health and Human Services).

➜ 71% of pregnant teenagers are from fatherless homes (U.S. Dept of Health and Human Services)

➜ 63% of youth suicides are from homes without fathers (U.S. Dept of Health)

➜ Teenage girls with two parents and a present father figure have a decreased chance of being sexually active than their peers without a father figure.

Given the information above we believe fathers are important to the household. Unfortunately, many children without a true father figure in their lives depend on media to fill in the answers.

If you look to media for what fatherhood means I believe what you will find is something that belittles fathers and makes the very thought of fatherhood less than.

Older adults will more likely appreciate this but think back to the shows you watched as a kid.

I’m talking about shows from the 50s to the 90s shows like I Love Lucy, Leave it to Beaver, and Fresh Prince of Bel-Air.

Those shows and many others from that era portrayed dads as strong fatherly figures and good role models.

The shows were of course sitcoms, and although they did poke fun at the fathers you never got the feeling, they were less than.

Those shows portrayed fathers as:

If you fast forward to current television series post-2000s, you get a completely different image of dads.

Examples of TV dads now revolve around the likes of Homer Simpson (The Simpson), Peter Griffin (Family Guy), Doug Heffernan (King of Queens), Ray Barone (Everybody Loves Raymond) and the list goes on and on.

For the record, I find some of the tv shows mentioned above funny, but their depiction of fatherhood is horrible.

Family shows in this current era shows fathers as:

1. Dumb. I believe the technical term to describe these tv dads is doofus. Most of the time these dads are lacking in book smarts, street smarts, and downright common sense. The TV dads give the impression that fatherhood is all about making poor decisions that put you and your family at risk.

2. Weak. Fathers and in turn fatherhood are described and shown as weak. Not weak in the physical sense but weak in the presence sense. Something about these dads just screams you’re lacking in essence.

3. Emotionally Unstable. These fathers are emotionally unstable. We see depictions of them not reacting appropriately. Their emotions tend to be the very definition of labile (having wild swings).

4. Passive. These fathers are passive in just about everything they do. They’re passive when it comes to disciplining their kids and being engaged in their family life. While we’re on it, these fathers are very much…Uninvolved.

5. Uninvolved. These dads have no clue what the heck is going on in their family. They’re aloof and completely disengaged. One time I remember one of the dads not knowing how old their kids were or what grade their kids were in.

Imagine you’re a kid and your dad is home every evening. You’ve been playing an instrument and having recitals for over a year…and your dad didn’t know anything about it.

Worst of all he doesn’t care to know.

My Thoughts on Fatherhood

But seriously as a husband and a father I’m tired of these doofus dads, and these passive husbands.

They burn the definition of fatherhood and devalue husbands.

To make things worse, they teach young boys that it’s appropriate to behave in such a manner.

While young girls learn it’s OK to date and marry a man that’s a complete “doofus.”

I believe fathers everywhere need to reclaim what it means to be a father.

We need to stop letting media and lousy role models define what it means to be a dad.

Being a father means

Your child’s mind is a blank canvas.

As a dad, you’re going to be painting on that canvas, and it’ll be your responsibility to monitor who or what is allowed to paint on that canvas.

You’re going to be entrusted to shape and mold your children’s mind.

Your child’s mind is a blank canvas….it’ll be your responsibility to monitor who or what is allowed to paint on that canvas.

“What Does it Mean to be a Father,” ParentsPlusKids.com

You’re going to have to tame the savage beast that is your kids. Kids want order and structure, but they create disorder and chaos.

It takes effort to train your kids.

It’s not just about order and no fun, but as a father, you’re going to be the bearer of good gifts.

I’m not talking about just material items but also of your time and efforts.

The simple act of going fishing with your boy or playing tea party with your little girl are gifts of memories.

Those memories bare more weight than any gift of video game or dollhouses could ever match.

4. Do Not Provoke or Aggravate Your Children but Discipline Fairly

One of the things that’s very common in current media’s depiction of fathers is their poor disciplining skills or lack thereof.

Many times, those absent-minded fathers are intentionally aggravating their kids.

There’s no need to needlessly provoke and aggravate your kids to anger and resentment.

That’s not saying you don’t discipline your kids.

You need to discipline your kids but do it with fairness and out of a place of love.

5. Fathers are Self-less in Their Love

As a father, you need to love your family with everything you have.

Your kids are going to need food, water, and shelter.

We don’t want to forget that as a father you need to contribute to the household to help provide for your kids.

Patience is defined as the ability to tolerate trouble, annoyances or suffering without getting angry.

Your work is going to do what work does.

Your kids are going to do what kids do (test boundaries and limits and see what they can get away with).

…you will some days just be overwhelmed.

Find ways to cope with it. It might be talking to your spouse or seeking the help of a licensed therapist.

Long-term, internalizing stress doesn’t work. You need to find an outlet to make sure you’re close to 100% as you can for your family.

Related: 10 Traits of a Good Dad

Fathers are role modeling the behavior they want their children to emulate.

You’re a role model for your kids, and they’re going to be watching everything you do.

If you have a son, you’re going to be teaching him how he needs to treat other women in his life.

If you have a daughter, you’re role modeling her expectations of how she should be treated by the men she dates and the man she will eventually marry.

The modern media has done such a bad job portraying fathers that I believe it’s time to take back fatherhood from the media.

As you can see from the mentioned statistics fathers, play a critical role in the home. They’re:

…and so much more

Men I challenge you to do your part because your son needs a good role model on what it means to be a man.

For you, what does it mean to be a father?