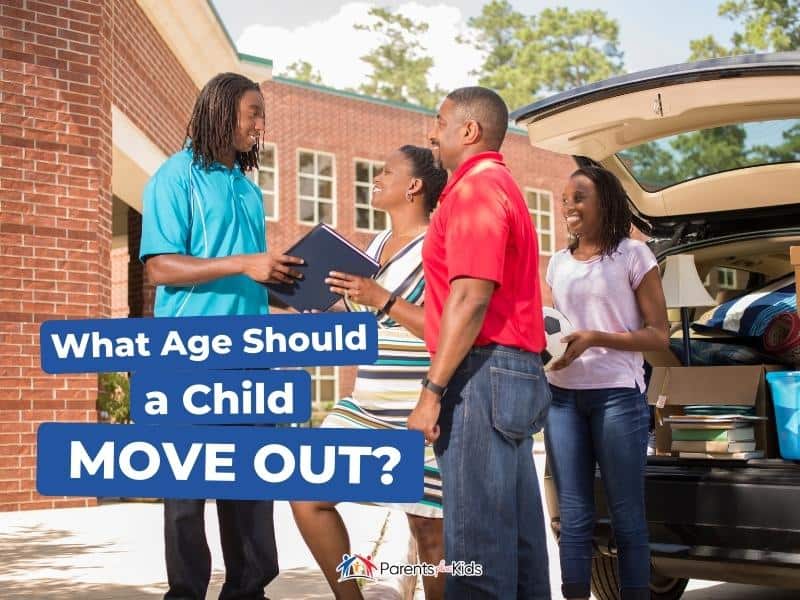 I admit it: There are days that I look forward to my kids moving out.

Granted, those days are pretty rare. I usually feel tears well up when I think about not living with my children any longer.

It makes me wonder what age children are expected to leave home.

*FYI, some of the links in this article about what age should child move out may be affiliate links. If you click and make a purchase, we may get a commission (at no extra cost to you). For more info, please see our disclaimer.

When Should a Child Move Out?

Children shouldn’t be expected to move out of their parent’s home until they have, at minimum, finished high school. It is perfectly acceptable for a child to continue living at home at least part-time through the early adult years. Most parents can predict a child to be fully independent by age 25.

Most Children Will Leave On Their Own When Ready

Most children have an eagerness to leave home once they reach their teenage years.

By age 18, kids start looking forward to moving into a college dorm during the school year. However, that doesn’t represent fully moving out.

These kids tend to return to their parents’ home over the summer and several times throughout the year.

Truly moving out on their own, and being financially self-sufficient while they do so, usually happens in their early 20s.

Why Children Are Living Longer With Their Parents

However, times have changed. It wasn’t long ago that it was considered odd for a child to continue living at home after college.

Today, the majority of adult children in their 20s are still living with their parents. This is mostly due to lack of financial independence, but there are other factors at play.

The High Price of College

The cost of college has risen at a rate that is more than double that of typical wage growth.

Students who want to go to college and don’t have access to scholarships or financial aid may find themselves living at home instead of a dorm to save money.

Even those who live in residence halls usually rely on their parents to pay for most expenses. In fact, it is the parental income that determines how much aid a student receives.

It is rare for a student to be declared independent unless they have already graduated college or reached age 24.

The lack of ability to pay for education leaves most students reliant on their parents throughout their college years.

No Rush to Get Married

People are getting married later and later. The average age of newlyweds is 31. That is a drastic increase from just 20 years ago when the average age was closer to 26.

With no rush to get married and start a family, adult children may feel no pull to leave their parents’ homes.

Children are coming later as well. Couples are putting off having children until they are financially stable. When starting a family is a distant dream, it might seem easier to stay with mom and dad.

The military used to be a great place for new graduates to learn skills and discipline while earning money and serving the nation.

The number of new enlistees continues to decline each year. For many young people, the military was the first step to independence. They were supplied with good benefits, a salary, and an education.

For some, opting against the military leaves no other choice but to live with parents.

My husband greatly benefited from his time in the military. He didn’t just learn a lot about himself, but he also managed to become completely independent.

He graduated from both college and grad school with no loans and no debt thanks to the GI Bill.

There was a time when parents were ready to kick their kids out of the house when they reached a certain age. That is not true anymore.

Parents have discovered how important it is to nurture their children. We want to give our kids time to grow. We also have lived through some pretty tough financial times. We know that kids might not be able to afford living on their own.

Parents who want to help their kids can let them continue living at home or can provide some financial support.

A one-time gift to put a down payment on a home or co-signing a lease on an apartment might be an important first step to helping a child gain some independence.

Another option is to remind them of other reasons they may want to move out.

Children shouldn’t feel any pressure to move out until they are fully able to care for themselves.

When do you think a child should leave home? What age were you when you finally moved out on your own? We’d love to hear your story! Tell us in the comments.