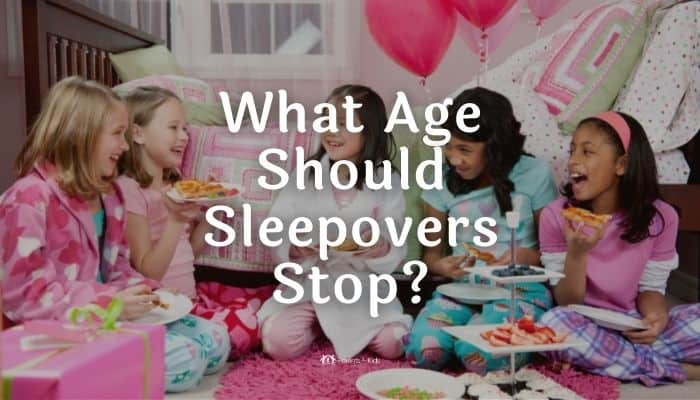 Sleepovers are so much fun!

Who doesn’t remember a night of watching bad movies, gossiping about friends, and trying to stay awake as long as possible?

They are great for kids but a lot of work for parents. At some point, parents might feel like their kids have outgrown sleepovers.

*FYI, some of the links in this article about at what age should sleepovers stop may be affiliate links. If you click and make a purchase, we may get a commission (at no extra cost to you). For more info, please see our disclaimer.

When Should Sleepovers Stop?

There’s no reason to stop sleepovers just because a child reaches a certain age. It depends on how mature the children are, what kind of trouble they get into and what other responsibilities older children might have. Choosing to end sleepovers should be done on a case-by-case basis.

You’re Never Too Old for Sleepovers

I had my last sleepover when I was 28. My husband was out of town, I didn’t have children yet, and the only reasonable solution to my boredom was to have my friend Stephanie spend the night.

We ordered pizza, sang karaoke, and talked about boys. It was A LOT of fun!

That’s my way of saying I don’t think sleepovers need to end at any certain age. In fact, a sleepover may be the best choice as kids get older.

Who wouldn’t want to have children staying home under a watchful eye rather than getting into trouble somewhere else?

One of the worries parents have that they rarely talk about is what the kids will do at a sleepover.

I’ll be the first to admit that I wasn’t exactly the angel that my children think I was. Especially in my late teens, a sleepover was more of an excuse to see what we could get away with than chatting with friends.

Still, most of that depended on whose sleepover it was. I often had more fun with my straight-laced friends than I did with the ones who introduced me to Purple Passion.

Even more importantly, kids aren’t drinking, smoking or doing drugs in the high numbers that we fear.

Less than 20 percent of kids ages 17 and 18 drink alcohol “beyond a few sips.” That number drops sharply for younger kids and for substances like marijuana and tobacco.

What About Sleepovers With Multiple Genders?

Perhaps the biggest fear that parents face is kids sexually experimenting with each other.

Parents need to understand what sexual behavior is normal and what isn’t. They also need to have open, honest talks with their children about what is and is not okay.

If this is a big concern for you, insist all sleepovers take place in a common room rather than a child’s bedroom.

You could also allow sleepovers only on a case-by-case basis and only with those children of the same gender as your child.

There is no real reason to stop sleepovers. Kids are safe when they stay at home. They enjoy spending time with their peers, so why not allow them to do so.

Do you think there is an age when children are too old for sleepovers? Tell us in the comments!

Yes, it is. Similar to how adults will buy adult coloring books, more adults are participating in activities they did during their childhood.

Some parents believe that while your child is at their friend’s house, they could be up to no good. Others are worried their child may be abused or exposed to abuse by their friend’s parents.

Sleepovers are still a thing. Many kids are still going over to their very close friend’s house to spend the night.

Around 7 to 9 years of age is not a bad time to start considering sleepovers.