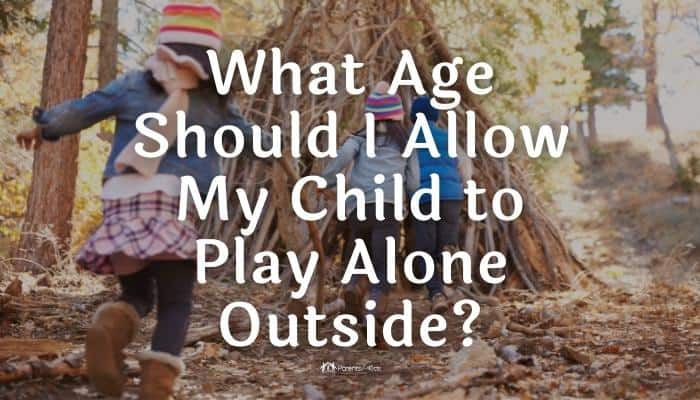 If you’re like me, you will never, ever want your child to play outside alone.

You will remember the story of a child who was abducted from their own yard, and the discussion will end.

However, despite all of our misgivings, the time for playing outside alone will come.

*FYI, some of the links in this article about what age should you let your child play outside may be affiliate links. If you click and make a purchase, we may get a commission (at no extra cost to you). For more info, please see our disclaimer.

When Can a Child Play Alone Outside?

A child can play alone outside when they have displayed the maturity level that will help them avoid common mistakes. This will be around 5-6 years of age for a fenced yard and about 8-9 years for an unfenced yard.

You cannot expect them to be perfect, but you can feel solace in knowing they have the tools to behave safely, even when they are alone.

I grew up in what could only be described as “rural extreme.” My closest neighbors lived a mile away, over a hill and down a gravel road.

Playing outside alone was what I did best. There was never fear that I would be abducted. The kidnapper would have to be extremely vigilant and a little lucky just to find our house.

Those who live in rural America may feel their kids are perfectly safe playing outside alone. However, kidnapping is only one issue.

Children can be seriously injured when left to their own devices outside. They can also become lost, which may lead to tragedy.

This is why it’s important to gauge a child’s age and maturity when playing outside alone, regardless of your location.

My Childhood Story
I had to have my stomach pumped. I was about seven years old and I ate a lot of poison.

There was a plant that I always thought was very interesting and I, being an adventurous and curious child, decided to eat as much of it as I could.

I wasn’t truly in danger of death, as far as I know, but I was very sick.

Being as rural as we were, it took almost an hour to drive me to the doctor, who then made it very clear that he was going to make me really regret my actions.

In the 1990s, this was still a common practice (stomach pumping, not eating poison). I learned a valuable lesson: Don’t eat poison. You would think that’s not a lesson that needs to be taught, but you would be wrong.

I have seen my children do plenty of dumb things while they were playing alone and together.

In fact, it seems much more common for them to take risks when they’re not playing alone. On the other hand, playing with a friend almost guarantees at least one person will be there to grab an adult or call poison control.

It’s not just ingesting strange plants that are a risk for a child playing alone. Falling into a well, getting lost, or meeting a wild animal can be the end of a child’s young life.

At a minimum, any of these situations and countless others can cause serious harm.

A Young Boys Encounter with a Bear Outside

The goal of showing you this video is not to scare you into never letting your child play outside but to encourage you to make sure your child is mature enough to handle being outside.

Most people aren’t going to have to worry about a bear. But depending on where you live, you’ll have other unique dangers, for example, Alligators in Florida.

Many times it’s not even wildlife but the plants growing on the ground.

The vast majority of kidnappings are carried out by relatives or friends of the family. Therefore, while it’s possible that a child will be abducted while playing outside alone, it’s statistically more likely to happen after a family reunion.

Talk to your child candidly about abduction. Tell them what to do if anyone, stranger or someone familiar, approaches them when they are alone.

In my family, the answer to that is “run inside as fast as possible.” It doesn’t matter if it’s our sweet, elderly neighbor or a teenager driving past the house. My young children have never been allowed to have close talks with anyone when they are playing alone.

The Right Age for Playing Outside

There is no hard-and-fast rule regarding the right age for playing outside alone.

A responsible10-year-old might sometimes do a better job at being safe than an older teenager. However, there does come a time when you need to start trusting your children. That usually happens around age 10.

Prior to allowing children to play alone outside, set some ground rules. Tell your child they must check in with you on a regular basis.

That might be every 10 minutes at first, but eventually, you can spread it out to every half hour.

Along with explaining about stranger danger (and not-so-stranger danger), remind children they should never pet a stray dog, they shouldn’t walk away from your home, and they should always keep a cell phone nearby in case there is an emergency.

Before playing outside, make sure your yard is safe. Children should never play alone in a backyard that has a pool, fountain, or other bodies of water.

Bury any exposed cables and look around for possible hazards like broken sidewalks or hornet nests. Remove the danger and allow your child to have fun.

Children who have reached the tween years are generally safe enough to play outside alone.

What do you think? Do you think children should be younger or older when they are allowed to play on their own? Tell us in the comments!

Have You Read These?

As long as it’s a fenced-in yard and you think they are mature, 10 years is an appropriate age to consider letting him or her play outside.

It’s very healthy for kids to play outside. Outdoor play will help them burn calories and prevent childhood obesity.

There’s less traffic in those areas, so it reduces the likelihood of something bad happening to your kid, but it doesn’t mean it’s 100% safe. Parents still need to take caution.

Your kid having a buddy to play with outside (such as younger siblings) may keep them safer. If something is going wrong, there’s someone else who may be able to run for help. Or at the very least tattle on the other person.