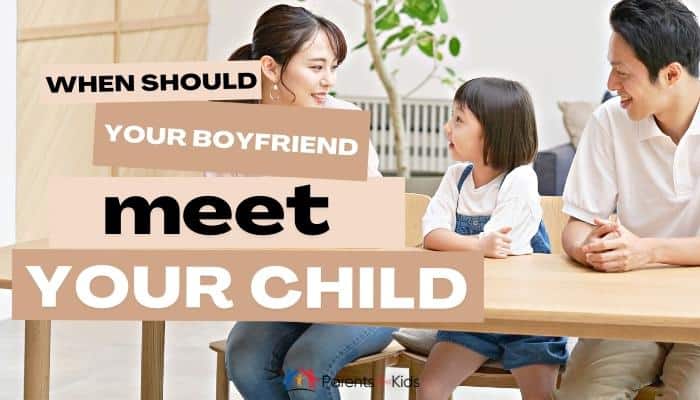 He has been talking about moving in together or getting married.

She is thrilled with the prospect of a happy marriage. However, she has one big obstacle: He hasn’t yet met her children.

*FYI, some of the links in this article about when should your boyfriend meet your child may be affiliate links. If you click and make a purchase, we may get a commission (at no extra cost to you). For more info, please see our disclaimer.

When Should a Boyfriend Meet Your Children?

The timeline for a boyfriend meeting your children depends entirely on how you choose to raise your children. If you want them to see how dating can be fun, an early introduction is fine. If you want to wait until you know the relationship will last, that’s okay too.

A single mom has a lot of worries that go far beyond what a partnered mom can ever understand.

There is no one there to co-parent, take on some of the burdens or just give her a rest.

All bills and decisions fall on her as well. Along with all of that, she has to find time to have a social life. If she’s lucky enough to find time to date, a whole new set of issues arise.

The Emotions of Divorce

Danielle’s children had to go through a contentious divorce. Their parents spent two years battling over custody, alimony, and child support.

Prior to that, the only thing the children saw from their parents were screaming matches followed by periods of silence.

Danielle now says she should never have married her ex-husband. She had reservations from day one but felt cornered into the relationship.

Naturally, she doesn’t want her children to relive this type of situation.

She worries that introducing her new boyfriend to the kids will introduce a type of PTSD.

While they know she is dating, she is determined not to introduce them to the new boyfriend until she is absolutely certain that he is “the one.”

Julie* had an experience that couldn’t have been more different than Danielle’s.

She and her ex-husband had a divorce that was almost better than their marriage.

They split amicably, agreed on custody and child support payments, and continued to be close friends. Julie even introduced her ex to his now-fiance.

The problem came when Julie entered into a serious relationship. Believing he was the next Mr. Julie, she introduced her children to him right away.

They all became very close, which was good for the kids who were just growing used to living in a home without mom and dad together.

The happiness came crashing down when Julie, with one of her children by her side, caught the new boyfriend in the act of cheating.

She now says she won’t introduce her children to a new boyfriend until a strong relationship is already established.

The Joy of Dating

Jane* was a single mom from day one. The father of her child is not involved in their life; her son has no memories of him and no experience living with two parents.

She believes it’s important for her son to see her date with the knowledge that none of the men she goes out with will be his “new dad.”

She believes it is beneficial to him to know dating can just be fun without plans for a long-term commitment.

My husband agrees. He was raised by a single mom who, as far as he was aware, never dated. If she did, she never talked about dating and certainly never introduced him to a partner.

My husband says that was a mistake on her part.

He believes his own dating experiences would have improved if he’d seen her interact romantically with another person while he was young. Having dated my husband for years before we were married, I wholeheartedly agree.

Your children will not be damaged if they meet your boyfriend sooner than you think is appropriate.

As long as you don’t get their hopes up about an impending marriage, the meeting can happen whenever you wish.

Has this happened to you? Tell us about your experiences in the comments!

*names have been changed