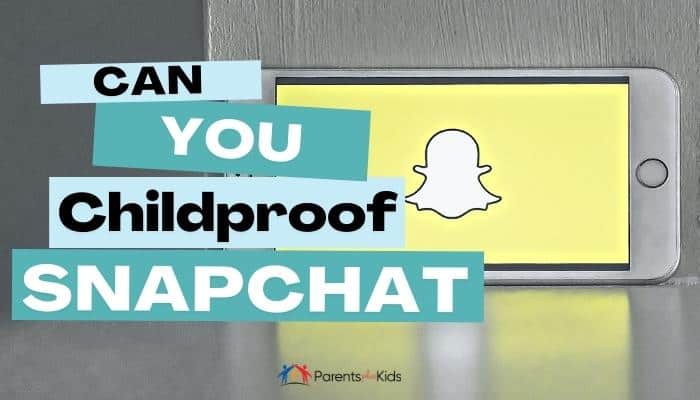 Snapchat continues to be a popular app among children and teens.

The app lets kids talk to each other using messages and photos that theoretically disappear within moments of being shared.

Unfortunately, like all social media, there is a risk of predatory behavior and bullying. Parental controls are necessary.

*FYI, some links in this article about can you childproof Snapchat may be affiliate links. If you click and make a purchase, we may get a commission (at no extra cost to you). For more info, please see our disclaimer.

Can You Childproof Snapchat?

You can and should enable parental controls on Snapchat. However, you should also be aware that kids, especially teens, are fairly adept at disabling the controls you put on their phones. Put measures in place that allow you to know what your children are doing on their social media accounts.

The most important thing you can do to childproof Snapchat is the same as all social media platforms: Be aware of your child’s usage.

My family has fairly strict rules regarding social media. Phones, iPads, and laptops are only allowed to be used in common areas.

Parents have access to all passwords so we can check what they are doing if we feel the need. This limits the possibility of “secret” accounts as well.

My son was not allowed to have social media of any kind until he turned 13. This is the lowest guideline set forth for all social media platforms which we follow.

That said, many children under 13 have social media accounts, and some parents don’t allow these accounts until their kids are even older.

Related: At What Age Should You Let Your Kid Sign Up For Social Media?

Snapchat became popular because it’s a social media platform with fewer long-term consequences than others.

Snaps are meant to disappear after they’ve been viewed. However, it’s easy to take a screenshot or even save the conversation or photo.

Children who think they’re being somewhat anonymous using Snapchat need to know that anything they put on the internet, no matter how brief, can be saved forever.

As much as we hate to hear it, children have been exposed to or been made a part of criminally inappropriate images on Snapchat.

Make sure your child knows the consequences of showing their bodies or being shown things they don’t want to see before they start using Snapchat.

Snapchat offers a parental control feature that lets you decide what your child can see and share. It also gives you the ability to control who can contact them.

Along with the parental controls on Snapchat, you should also add a parental monitoring app on your child’s phone.

Children can and should report any offensive content they see. Whether that content comes from friends or strangers, it needs to be reported right away.

To do this, they tap and hold the post and then tap the red flag that appears.

In addition to the official report, children should tell you when and if they see something that troubles them.

You do need to childproof Snapchat as well as you can.

The first step is making sure your child is aware and mature enough to manage this social media platform.

What do you think? Have you encountered any issues with Snapchat? Share your stories in the comments!

You can use software such as mSpy to see what your child is sending on Snapchat.

No Snapchat is not safe for kids to use without parental supervision and guidance. Parents should educate their kids on safe internet practices and monitor all social media usage.